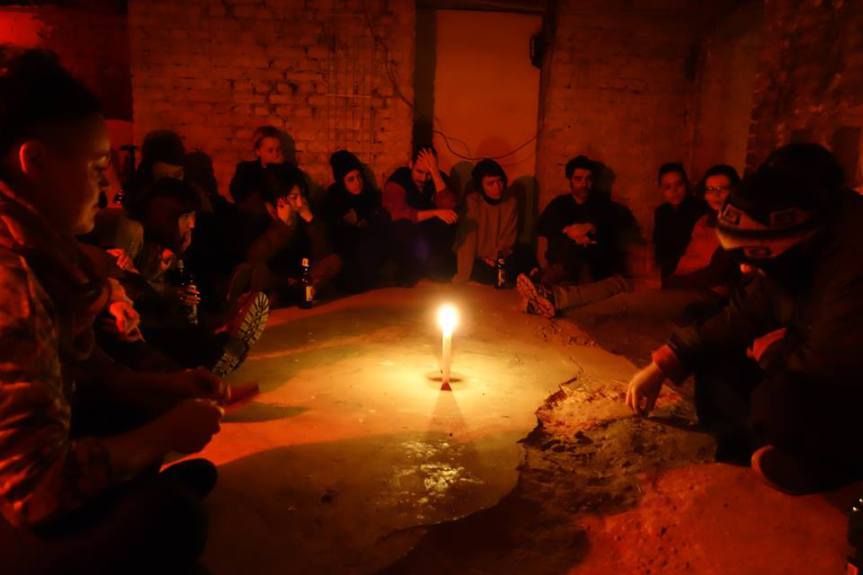 We are organizing the II Technoshamanism Meeting in Berlin!!!

Do you remember the first one? Here it is: https://tecnoxamanismo.wordpress.com/2016/02/25/archives-of-technoshamanism-meeting-berlin2016/…

Once again, we are calling all the cyborgs, witches, heretics, technoshamans, programmers, hackers, artists, alchemists, thinkers and everyone who might be curious to gather on sunday July 17, from 14:00 to midnight, in order to create discussions and practices regarding technoshamanism, thus strenghtening our newly started community in Berlin.

This time, it will be a little different then the first one. The event will happen in one single day and the purposed subject which will form the basis of the activities will be: II INTERNATIONAL FESTIVAL OF TECNOSHAMANISM – here’s the open call:

CALL FOR PARTICIPATION in the II International Festival of Technoshamanism

WHAT IS THIS FESTIVAL?

In April/2014 we did the I INTERNACIONAL TECNOSHAMANISM FESTIVAL in Arraial d’Ajuda in the south of Bahia/Brazil, in a permaculture and agroforestry site (Itapeco), in the vicinity of the Pataxó indigenous people. You can see it here: https://tecnoxamanismo.wordpress.com/2016/02/16/primeiro-festival-internacional-de-tecnoxamanismo/

It was an incredible meeting with so many interesting projects, and with the incisive participation of indigenous group Pataxo of “Aldeia Velha”. Two years after, a different Pataxo community invited us to make the II International Festival inside of their community: Aldeia Para, the Mother community of Pataxo people. It will happend in Caraiva, Aldeia Para in one of the most beautiful and rustic villages in southern Bahia.

To see some videos of the indigenous pataxos talking about the festival, here:

WHY THIS II MEETING IN BERLIN?

We want to take the opportunity of our stay in Berlin to make the II meeting to in order to strengthen the network and introduce the theme of the II Festival, that is “resistance and networks in the anthropocene”. We will follow the principles of technoshamanism, which aims to connect new technologies with ancestral ones in order to repair the historical division between the two kinds of knowledge. Technoshamanism intends to create new inputs for unorthodox ways of thinking regarding the development of free technology.

We know that there are so many interesting projects going on in the DIY scene in Berlin dealing with matter, alterity, interespecifics, psychogeophisics, transcultural, body and so on. We want to aproximate these practices with the technoshamanism enviroment.

We have here some ideas:

1- What is the relationship between Hidden Services and the practices of revelation?
2- What is the connection between matter transformation and subjective transformation?
3- Is it possible to picturean ancesterfuturism without linearity?
4- What means make diy rituals or free cosmogony in a city so transcultural as Berlin?

All kind of practices in free technologies are in our view fundamental – landscape, body knowledge, electronics, healing rituals…

In the afternoon we will make various radio debates, workshops and after 21 pm we will make a technoshamanistic ritual in the basement. (it is not hot inside).

– You know, we do it for free, just because we want and can!!

The program is still open!!

If you want to take part in this intense day, you are wellcome.

Carsten Agger (Denmark) – Baobáxia – an internet between quilombos – a community organized effort to preserve the cultural heritage of rural, often off-line and very dispersed Afro-Brazilian communities – and to liberate digital cultural work from the behemoths of Google and Facebook –

Peggy Sylopp (German) – A community of changemakers seeks to create a collaborative workspace for all who are developing innovative solutions linked to the social challenge of migration
http://www.migrationhub.eu/

16:00 – OPEN SOURCE OBSERVATORIES – Open Source Observatory is a distributed network of sites and gatherings for the observation of satellites, spacecraft and space junk.

Fabiane M. Borges (Brazil) invite participants to experience a number of transnarratives and intertextual techniques to produce a fiction whose elements will underlie the DIY ritual. This is one way to prepare an immersive ritual from a collective process.

Here is the call for such an immersive process organized in Rio de Janeiro, Brazil (Capacete): http://capacete.org/?p=1966&lang=en

Obs: 1) The interested needs make registration by email catadores[@]gmail.com;
2) All the registered must start to write down their own dreams to bring tot the workshop;
3) It is important for us to collaborate with all people and groups who want to work in the ritual.

2- COLECTIVE IAUZK/U – (Viktor Vejvoda, Sebastien Mazauric, Gustavo SanRoman) will psychonautic assistance and astronomical-weird visual projections, will temporarily behave as a semiographs, drawing combinations of shapes and subtles meanings, under the mixed influence of the ritual and personal obsessions (absurdity, human realm, fantasies, aesthetic and panache),present and perform possibilities of reverse engineering and re-use of old laptop batteries and ways of amateur diagnostics, recharging and use every one can adapt. Recycled source of energy via Li-Ion 18650 battery cells will be used for the whole team in an adaptive-disposable way.
http://iauzku.tumblr.com/

Free digital networks and sharing of internet self organized by communities. The Freifunk Network in Berlin and Germany introduces itself, the social and political impact and the technical realization.
https://berlin.freifunk.net/index_en/
http://pankow.freifunk.net/

Carsten Agger is a software developer, activist and writer who has been active in social movements, for free software and civil rights and against racism and colonial wars, for twenty years. Trained as a theoretical physicist he works as a free software developer, contributes to the Baobáxia project and co-organized the LibreOffice Conference 2015. He wrote a book about the Qur’an and is currently studying Norse religion and language for a comparative project. Carsten is based in Aarhus, Denmark.

Fabiane M. Borges is phd in clinical psychology, essayist and artist. Her research is about Space-art, art, technology, shamanism, performance and subjectivity. Usually she call her own work as “imersive process”. http://catahistorias.wordpress.com/

Freifunk stands for distributing free networks, democratizing media of communication and promoting local social structures. By interconnecting whole neighborhoods, we want to bridge the digital gap and establish a free and independent network infrastructure. More precisely, the aim of Freifunk is installing open wifi networks and interconnecting them. This facilitates free data “air traffic” in the whole city within the Freifunk network. In short, Freifunk is an open, non-commercial, non-hierarchical initiative for free networks.
https://berlin.freifunk.net/index_en/

Kei Kreutler is a researcher, web developer and community facilitator interested in networked practices for nomadic groups and applied autonomous living. She currently contributes to @unMonastery, @OSObservatory, @TransforMap, @2nd__foundation, @SatNOGS, and is Spatial Advisor at Large for the GPA.

Markus Schwill aka Ohmnoise is a Berlin artist. His main focus on these days is the research and manipulating, in a positive way, of the human and universal soul. His experiments and knowledge are integrating into a ritual-performance based on ancient intuition and modern technologies. He calls his performances SOFTWAR, to create an aesthetic acceptable contention in reference to our inner world and the actual daily horror news. He works since 1981 in the fields of wired music, added video and fine arts later on and was a curator for hundreds of events in the Berlin alternative art-scene. https://www.facebook.com/ohmnoise

Moana Mayall multiartist from Rio and based in Berlin. At the moment goes through a portal experiment between the Complexo do Alemão (=”German Complex”, biggest favela complex in Rio, Brazil), and the enigmas of the Deutsch Komplex.

Peggy Sylopp She is Dipl. Computer scientist and artist, founder of PexLabs. Her passion lies in the combination of art, technology and science, as with own artistic works or in the design of workshops or campaigns. So she searched for her Public Policy Master’s thesis about the potential of artistic work to pass on technical knowledge. Her installative and performative light arts are based oa.o. on motion detection, 2008, she was nominated together with her partner Giovanni Longo the German Sound Art Award. http://peggy-sylopp.net/

Colective IAUZK/U – Kooperativa-Extitution dedicated to Open source, Peer to peer,Social Design,Urban Gardenin, Sharing economy, DIY strategies – (Viktor Vejvoda, Sebastien Mazauric, Gustavo SanRoman) psychonautic assistance and astronomical-weird visual projections, will temporarily behave as a semiograph, drawing combinations of shapes and subtles meanings, under the mixed influence of the ritual and personal obsessions (absurdity, human realm, fantasies, aesthetic and panache),present and perform possibilities of reverse engineering and re-use of old laptop batteries and ways of amateur diagnostics, recharging and use every one can adapt. Recycled source of energy via Li-Ion 18650 battery cells will be used for the whole team in an adaptive-disposable way. http://iauzku.tumblr.com/

Gustavo Sanroman – Works at alg-a Laboratório, a galician rur-urban hack-lab and art residence, which since 2008 is focused on the engagement with the Commons movement, the rural-traditional knowledge, the free technoscientific experimentation (astronomy in his case) and psycho-geography. For the collective Saturday’s ritual, he would like to offer psychonautic assistance and astronomical-weird visual projections. http://utopia.comlu.com/ – http://uttarayan.tumblr.com/ – http://lab.alg-a.org/

>top e.V. Association for the Promotion of Cultural Practice has been operating in Berlin since June 2002. Our members are artists, researchers and activists, whose activities range from individual research to curating project space and to international collaboration. Our infrastructure supports projects that pursue an interdisciplinary approach, support international exchange or deal with non-commercial attitudes. This includes but not limits to project space, webspace, channels of distribution and networking. http://www.top-ev.de/top/

Vanessa Ramos-Velasquez – is media artist and transdisciplinary researcher from Brazil and the United States, where she was a Fulbright scholar in Art & Design and Media Studies. Her artistic practice started with Structural/Materialist image-making via cameraless animation for her experimental films to VJing as part of her performance art and installation pieces. Her most recent work intersects with art, design, culture, science and technology, ranging from sonification of data in dendrochronology, videomicrography and creative coding for immersive interactive performative installations where the public is invited to integrate the assemblages. http://www.quietrevolution.me